That One Time in Texas...When It Froze

**I started writing this over a week ago.  Right after the "big freeze".  But I did not finish writing it until tonight.**

A week ago I woke up to a cold, wintry morning.  No I was not dreaming and yes I was totally sober.  Upon getting out of bed I immediately felt a draft that wasn't there the night before.  There was a kind of an 'extra' chill in the air.  I shrugged it off and started my way to the bathroom.  What?  You know you do it too.  As I passed my bedroom window I decided to look out the blinds.  I remembered that the news the night before, had said we were in for a few snow flurries and since it was colder than normal in the house, I was curious to see if there was anything to see outside.  Now keep in mind, every newscast since Friday had warned us that a blast of artic air accompanied by freezing rain, sleet and snow (!) would pretty much paralyze the city.  Don't laugh.  This is Texas.  We don't do winter here.  Hell, we can barely drive on a sunny afternoon let alone on an icy, snowy road.  Where was I? Oh yes, I peered out the window and was pleasantly surprised.  There was actual snow on the ground, on the cars, on my neighbors' rooftops.  It was like freaking winter wonderland outside!  And this snow was not the kind we are used to getting.  Normally, if they say "slight chance of flurries", they really mean slush.  A combination of ice and rain.  And if by chance there are actual snow flurries, well they don't stick.  It melts before it even hits the ground.

Since I was working from home that day (remember the our city was already shutdown in anticipation of this storm), I quickly proceeded to get ready so I could go play outside.  I'm not even kidding. I checked the temperature outside and it was a 16 degrees.  Yeah, that's not a typo.  Listen, when we say cold here, we're talking 40 to 50 degrees tops.  There's nothing better than a cold morning, inhaling that crispy air and feeling your insides wake up quickly.  Except this was not like any other typical cold morning.  I realized that as I stepped foot outside my door.  This cold air was wicked.  I felt it from the top of my messy hair to the tip of my frozen toes.  I felt it in my bones.  I'd never experienced anything like it in my life.  -Although, people insist that it froze like that here back in 1989, I would have been around 22 years old.  I have tried to remember but I have no recollection of that happening.

The first thing I did was take my gloves off (yes I own a pair) and grab a handful of that beautiful, soft and fluffy snow.  I tossed some of it in the air and tried to catch some flakes with my mouth.  Ha. That was a sight to see.  I was totally that kid.  I made a snow angel for the first time ever and basically just enjoyed this awesomeness of the snow.  Once I had satisfied my inner kid, I went back in the house and got down to work.

And then late that evening, about 6:00ish or so, just as I was thinking about what to make for dinner, all of a sudden, everything turned off.  Everything.  I wasn't too panicked because again, they had warned us that our power may go off because of the ice, but not to worry.  So I didn't.  Instead I went for the candles and the flashlights.  Well, one hour turned into two hours and then three hours.  What's a girl to do, right? I tried reading, using one of my flashlights for light.  But funny thing, when it's freezing outside and there is no heat in your home, you kind of lose interest in doing anything else but staying warm.  As the hours turned into more hours, and whatever glimmer of hope  I had in the power being restored that night, I gave in to the realization that we were going to be in the dark until daylight broke.  So I hunkered down in my bed, underneath countless blankets.  My mind was racing.  I kept thinking that I needed to go home.  Home is where I feel safe.  It quickly dawned on me that I was home.  My anxiety was over the roof.  Work stress, pandemic stress, being sick, my mom falling a few weeks ago and dislocating her shoulder, and now this.

I've noticed that I have been overeating way more than I normally do.  I am also extremely short-tempered these days.  Any little thing makes me snap and I don't like that.  That is not me.  I blame the pandemic for that but this freeze and subsequent blackout, has only escalated my distress.

The following morning we awoke to a very cold house, lower freezing temperatures, lots of rain mixed with snow and still no electricity.  It would be three more days before power was restored.  Three very long, very cold days.  We didn't lose water until Wednesday and it would not return until Saturday.  A funny take from this craziness is that in the middle of the storm and with literally thousands of people without water or electricity, the city was put under a "Boil water" notice.  Freaking hilarious.  What water was this that they spoke of?

On Thursday night at about 11:30ish or so, our house lit up like a Christmas tree.  Praise God there was light!  I jumped out of bed and quickly ran around turning off appliances that had been in use before the lights went out. When I heard the sound of the central heat turn on, my heart jumped in delight.  That night I slept better than I had since Sunday night.

As the city slowly tries to recover from this madness, stories of people sleeping in their cars for warmth. Some of them though, tragically didn't make it.  There was a family of five that slept in their cars, in a closed in garage and they died from carbon monoxide poisoning. Then there was a story of a man who had buried his mother the night before the storm, only to wake up the following morning going door to door in his neighborhood with his tool box in hand, offering whatever help he could and would not take anything for payment.  He said in an interview, that it was something his mom would have wanted him to do.  Stories like his is what keeps my faith in humanity alive.

There are still so many people who are still without any electricity and/or hot water.  People's homes have broken water pipes due to the freezing temperatures, there are downed trees, wrecked cars and other weather related damage.  There is something terribly wrong happening when an entire state fails to provide it's citizens with even the most essential of necessities:  electricity and hot water. Regulation or not.  This was a disastrous situation that should never have happened and was coupled by the lack of leadership from Austin.  But that's another blog post for another day.

As Houstonians do in times of crisis, we sprang into action the minute we were able to  Fundraisers, food drives, bottled water giveaways, neighbors helping neighbors, putting aside any differences or discord in order to help one another get through the aftermath of mother nature's reckoning.  We have received help from all over the country and that alone makes my heart swell.  It's a beautiful thing but there is still much left to do.  If only we were always this nice to one another. If only we could all have differences yet still get along.  If only we did not let the color of our skin, divide us.  If only love could make hate go away.

*As many of us did, there were tons of picture sharing on social media last week. A couple of friends of mine gave me permission to use their pics in this post.

Thanks Melissa and Michael 💕 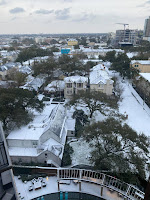 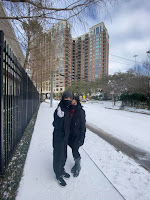 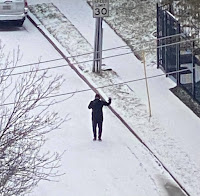 All I can say is, I'm glad you made it okay. I had been praying for Texas... the inescapable parts made me sad, the preventable parts, enraged. I'm glad you got to enjoy at least a brief moment of it. Here, we avoided the power outages, subtracted about ten degrees, and multiplied your snow by a factor of a dozen or so. Missed one day of work. Misty learned to walk herself a trench ('hop herself a trench', more accurately) to poop in. Today, we finally had enough snow melt to do a poop pick-up.

I'm sad that you and so many other people had to go through that. I saw a couple of articles about 1989, but they didn't say how long that lasted or if huge numbers of people lost power and water. If it were as bad as the recent snow, don't you think you and a lot of other people would remember it?

I watched what was going on in horror. So thankful you and yours survived it. Have you gotten your heating bill yet?
I found it interesting that AOC was in Texas helping out while Ted was in Cancun.

Jane- I honestly can't remember. Hope you are well.

Sandra- thank you. I did receive it but it was not high at all. Had it been, I more than likely would have blogged about it by now and/or raised hell with ERCOT. ;)

My last post was prompted by events that occurred over the weekend.  The thing about social media is that no matter how big we think this w...