I can't stop smiling and feeling giddy and happy.  Still on that euphoric high from game 7 of the World Series and the significance of the Astros finally winning a championship.  The first ever for the franchise and it only took 54 years to do it.  But it was well worth the wait.  Some people have been waiting for it all of their lives.  Some never  got to see it happen.  I saw a picture of a headstone at a cemetery with an Astros jersey draped over it and beside it, the front page of the Houston Chronicle, showing a picture of the players celebrating on the field right after the last out, with the headline reading:  World Series Champions Houston Astros!  The son of the deceased, said that he wanted his father to know that they finally did it.  I started tearing up reading that anecdote.  I've been tearing up a lot the past few days.  Not from sadness, but from sheer happiness.  Some people have not a clue as to what winning this series has done for our city.  Sure, they played their hearts out for us because of the devastation we endured because of Hurricane Harvey.  But that aside, they played their hearts out because they knew how bad we wanted it.  How bad we could taste it and because of how many times we got so close, only to have it snatched away.

Htown held a party on Friday afternoon.  To say that work productivity was at an all time low that morning would be an understatement.  The electricity in the air and the excitement was palpable.  I drove in to work that morning to find a sea of orange already lining up along the parade route. That was at 7:00 a.m., the parade would not start for another 7 hours.  There were some fans that spent the night on the streets, sitting on their lawn chairs, because they wanted the best spot.  Crazy? Maybe.  But who cares?

I worked until noon and walked across the street to City Hall to join a few of my thousands of friends.  The scene was unreal.  The streets were full of people of all ages.  Security was in full effect as well.  On foot, on horse back, in cars, atop buildings.  It was a sight to see that's for sure.  The sea of people ran for miles.  There were people perched on tree limbs, children on parents' shoulders, along parking garages, even on light posts.  I saw a man in nothing more than red white and blue undies hanging from a lamp post.  I giggled and wondered how long he would last before getting arrested. Pandemonium ran ragged as the first glimpse of the players was made.  They were riding atop fire trucks.  There were Astros of seasons past and present atop those engines.  I welled up in tears as Carlos Correa held up the trophy.  I couldn't believe it.  It finally happened.  My gosh it's like a dream you never want to wake up from.  My dad was able to make this historic event.  He was like a little kid in a candy store. My 78 year old dad was beside himself with happiness.   Memories of trips to the Astrodome to watch the Astros flooded my mind.  He took all four of us, my brothers, sister and I.  There we learned from him the love of the game.  The love for the Astros.  We learned to yell "Cruuuuuuuuuuuz" whenever Jose Cruz was at the plate.  We learned how to spell relief when Joe Sambito (a relief pitcher and my crush) would go to the mound.  Oh and relief is spelled "S-A-M-B-I-T-O"  in case you wanted to know. Heh.  We soon learned that winning wasn't everything.  Man those were the days.  So yes, forgive me if I have been a little teary-eyed this past week. Or if I can't talk about anything else yet.  It's just...We won a Championship y'all!

I watched game 7 with one of my brothers and my sister-in-law.  The minute they won and we regained our composure, we hollered and cried and hugged each other like mad.  It was a beautiful sight.

I love the fact that an event of this magnitude  was a safe one and no reports of looting or vandalism or any of that nonsense took place.  I'm sure there were a few arrests made for minor infractions but for the most part, everything went off without a hitch.  Houston City Officials should be very proud of themselves.  At last count, there were over a million people that descended upon downtown Houston.  A million.  Wow.

I can honestly say that this was by far the most thrilling World Series I have ever witnessed.  Hell the series against the Yankees was pretty amazing as well.  And now, after all is said and done, me along with every other Houstonian, can go back to sleeping normal eight hours and can put the blood pressure and anxiety medication away and we can stop biting our nails.  Until next season that is.  Which by the way is only 145 days away.

Thanks for a Cinderella season boys!  See ya in April. 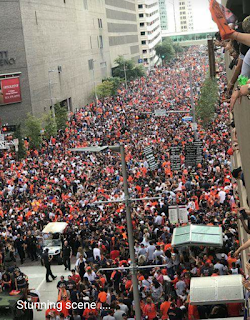 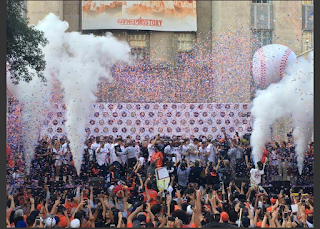 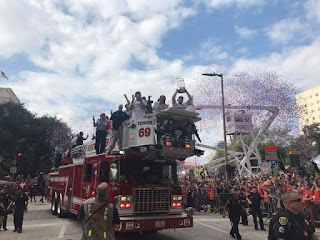 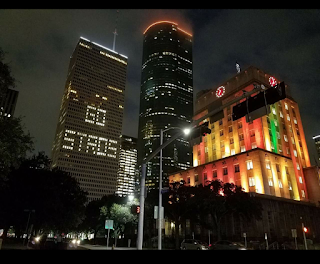 If you have been a follower of my blog for a while, you know one thing is certain about me.  And that is my love for baseball but more specifically, my love for the Houston Astros.  This morning I woke up and I had to pinch myself.  I needed to assure myself that last night was not a dream.  I wanted to make sure that I had not just had the most amazing dream ever.  And guess what? It was not a dream.  It was very real and my Houston Astros were indeed the 2017 World Series Champions.

Finally, after enduring year after gut-wrenching, emotionally draining year, finally, the Astros did it.  They won the World Series!  Did you hear me?  They WON.THE.WORLD.SERIES.  Oh my gosh I was literally in tears when the last out was made.  I was with one of my brothers and my sister-in-law at a local bar/restaurant, along with about 200 of my closest friends.  We were there to witness history or to witness history repeat itself.  Luckily, the "curse" was broken and we were victorious.  And how could we not be?  This team that some had dubbed "the little engine that could" -had the best record in the league going into the All-Star break.  I knew back then that something special was going to happen but because of the history of the Astros, I didn't let myself get too carried away.  I just told myself to enjoy it while it lasted.  And boy did I ever.

When the last out was made I looked at my brother who was yelling and jumping up and down and I looked back at the TV screen and then it sunk in and I started jumping up and down and yelling, "Oh my god!" over and over again.  An overwhelming feeling of vindication, triumph, and sheer and utter happiness took over my entire being.  I was so incredibly happy.  So happy that I started crying.  So many years, so many let downs and then this season, the fantastic regular season and the explosive and exciting post season of their history, it was just all too much.  I had to let just let the tears flow.  And trust me, I was not alone.  More than a few she a tear right along with me.  Strangers became friends and camaraderie was in abundance.   Everyone wanted to savor that which we craved for so many years.

No more, "Wait till next year" or "Next year it's ours!" or "We'll be back stronger than ever!" -No boys and girls, this time, 2017 was our year and nothing and no one would take that away from us.  In what I can only describe as a Cinderella season, the Houston Astros won it's first ever World Series and came out champions.  It only took 56 years and lots and lots, I mean, LOTS of heartache and frustration, but they finally did it.  Let me tell you, being a baseball fan for a less than stellar team year after year was not for the faint at heart. But if you love baseball and you're from Houston, you made it through and remained ever hopeful.

I can honestly say that this World Series has been by far, the most exciting and intense series that I have ever witnessed.  Game 2 alone was insane! Then along came game 5 and blew it out of the phenomenal water.

Now that the series is over and baseball is gone until next year, this happy girl is going to finally get her 8 hours of sleep.  I got a parade to go to in the morning.

My last post was prompted by events that occurred over the weekend.  The thing about social media is that no matter how big we think this w...